0
Product was successfully added to your cart

Electric Unicycles. Is it difficult to learn? 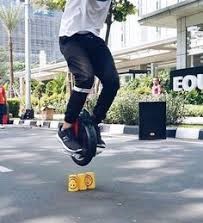 This is the common comment when people sees an electric unicycle rider wheeling passed them. Part of that impression was formed because the person is trying to balance on one wheel to move around. People generally associated an electric unicycle like as a Segway with a handle to assist a rider but the only catch is, there isn’t any remote controller or handle to help the rider.

So how does the rider balance themselves?

An electric unicycle assists the rider in staying upright by using an electric motor and gyroscopes controlled by a computer that is fed data from accelerometers and other sensors. There are sensors that line along the rim of the wheel called the hall sensors. The wheel uses the hall sensors and gyroscopes in conjunction with an electric motor measure the Y Axis dimensional movement which is then passed to the central processing unit to keep the unicycle upright. It also uses sensors with the gyroscopes to measure the Z Axis dimensional for safety feature and cut off the power to the wheel if it had sensed the self balance electric unicycle have toppled side way.

So in short, the most difficult part of balancing on the wheel has been taken over by the wheel itself. The rider will only need to learn how to balance left and right. Sounds easy isn’t it?

Humans have more than 5 senses besides sight, sound, taste, smell and touch. There are other senses such as pressure, itch, pain, thirst, hunger, balance etc… Training on electric unicycles can help students discover their sense of balance. The ear is a sensory organ for picking up sound waves and allowing us to hear. But it is also essential to our sense of balance: inside of the inner ear is the vestibular system (the organ of balance) that will adapt while you practice.

Electric unicycling is not exclusive to only the young people but an activity suitable for all ages. We’ve seen riders as young as 4 years old and up to over 70 years old. So if they can do it, why couldn’t you?